He'd Hate This IF He Ever Read What I Write! 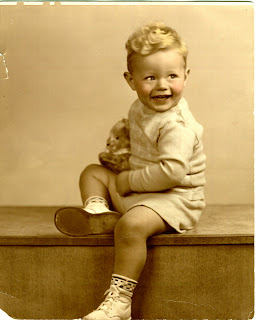 UPDATE: - DH did read this one - he googled his own name the other night and found this - wouldn't you know it? The one time I really break his desire to remain off-blog and he found it - not much was said but I don't think it really bugged him much!

I read bloggers who say their spouses and Significant Others read devotedly each syllable they print. My husband hates it when I write about him on "that blog thing of yours". He really doesn't want pictures of himself on "your blog". Sometimes he might sneak a peak but I don't know 'cause we are a modern marriage and each have our own computers!
Yesterday was his birthday - won't say how many he has had but it has been quite a few (and not nearly enough!). Here he was as a curly haired tyke in Michigan.

Restaurant picture was in Germany on our one big travel adventure several years ago. Picture was taken by our good friend - Yasser and his beautiful wife Mirella. 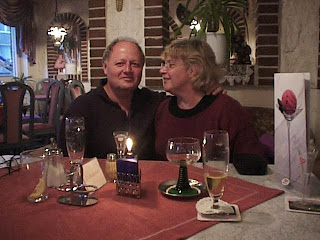 Our beautiful wedding ceremony on a New Year's Day - we were married in the bed and breakfast we owned in Colorado for a couple of years. 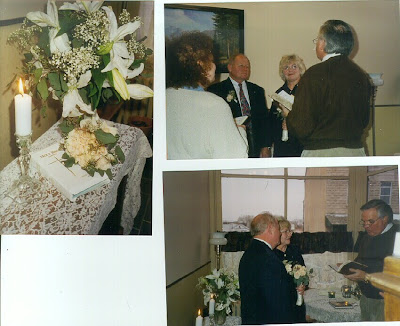 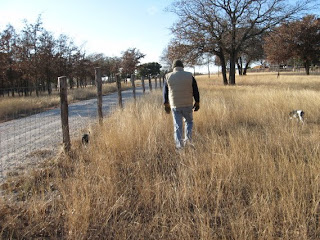 I love the picture of DH walking in our Texas winter landscape with two of our rat terrorist dogs. All our pets love him best - he is a good pet master and a loyal, funny and hard working best friend. Last picture he was literally saying - don't take a picture of me as I photographed him talking on his cell phone (probably to his brother, Roger).

Yes the porch needs repainting and it IS on the list - if you don't die until you complete all the work God has for you on earth - my sweet guy will live to be 150. Happy Birthday -

Sometimes they are clueless...and then they sneak a peek, you know they do. Ha.

Loved the photos. The last one especially for your "blog thing"!!

Happy Birthday to your guy. Dave is the same way, he never wants his photo on the blog and was resistant to me calling him Dave on the blog. When I said, "fine, what do you want to be called?" he relented and said, "Dave will do nicely."
How funny!

Thank you Mary and Sandra - wouldn't you know it - DH decided to google his own name tonight and said "hmm - google reveals a picture of me as a small child - wonder how that happened" busted!

Happy birthday to your husband! Such sweet pictures, even if he doesn't know! blessings,Kathleen

Wow, guess I'll quit feeling bad cause Dirt doesn't read my blog either. To get his input, because sometimes I do want it, I have to read it to him.

Really enjoyed the pictures of your "significant other"! The baby picture is adorable, what a smilely bright faced baby, completely reflected in the last picture of a happy man for sure. Happy Birthday!

Awwwwe - Linda this was a sweet post. I loved seeing your pictures and I'm so happy when I see not-young folks falling in love and tying the knot! Happy Birthday Skipper!

Oh LindaSue, I LOVE this post best of all your posts!First, Happy Birthday to your DH !!!!

The pictures you posted speak volumes and fill in a few blanks for me. When I read your posts I can tell you and your DH are thankful to God for all He has blessed you with and I can tell you love each other. I also think you both sound ( read ) like you're a lot of fun in spite of yourselves.

I still want to read more about your B & B days...please? Of course after all the new babies come. They will keep you both busy for awhile...bless you both!

Happy belated Birthday, Mr. Linda Sue! Hope you have many many many more!!