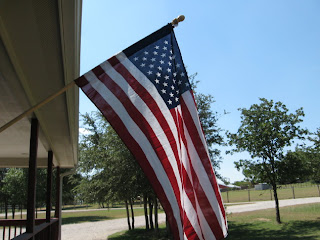 Flying the flag every day here on Buhlaland, we are proud of the principles upon which country was founded. "We hold these truths to be self-evident, that all men are created equal, that they are endowed by their Creator with certain unalienable rights, that among these are life, liberty and the pursuit of happiness." The Declaration of Independence is a clear and well stated document. We challenge you to locate clarity or logic in anything coming out of Washington (or state capitals) in 2009.
The Creator endowed us with rights - not a government. We heard a recorded sermon given by the late Adrian Rogers reminding Americans what the government gives - it takes from us. Government has nothing to give until it takes it away from it's citizens. Government doesn't give us freedom, justice or safety - it doesn't possess them to give. Tea Parties are being held in hundreds of towns- people gathering to state the obvious - government cannot spend our country into prosperity. Please pray this holiday weekend for elected officials to exercise a sense of responsibility and reasoned action.
Enough of the heavy stuff - here on Buhlaland it is hot - going to be hotter. Watermelon in our fridge and a turkey is defrosting for weekend feasting. Below is a quiz I found online and reproduced here - hope you find it fun, instructional and you can trot out some interesting facts at the family barbecue this weekend! Stay safe - be grateful for our liberties - freedom has never been free - whether for a country or our eternal home-the cost has been blood. We are blessed and grateful here on Buhlaland.
American trivia: How much do you know?

THE DATE
1. Which three presidents died on July 4?
2. Which president laid the cornerstone for the Washington Monument on July 4, 1850?
3. What was the title of the 1969 Broadway musical, written by Sherman Edwards and Peter Stone, that told the story of the founding of the United States?
4. What city in the American South fell to Ulysses S. Grant and Union forces on July 4, 1863, after a short siege?
5. What twin advice columnists were born on July 4, 1918?
6. In one of the wildest baseball games of all time, the New York Mets beat the Atlanta Braves, 16-13, in how many innings on July 4 (and 5), 1985?
THE FLAG
7. When was the Stars and Stripes authorized by Congress as the national flag?
8. The flag has 13 stripes. How many of them are red?
9. Francis Scott Key wrote the words to the Star-Spangled Banner after witnessing what?
10. Where and when was the first 50-star flag flown?
11. On the first U.S. flag, why were the stars displayed in a circle?
12. True or false: When the Pledge of Allegiance was published in 1892, the words "Under God" were not included.
THE PRESIDENTS
13. Which president served the shortest term?
14. Which president, to show his disdain for ceremony, would greet ambassadors in his pajamas?
15. Which president was the first to throw out the season-opening pitch for professional baseball?
16. To whom was the first telephone call made from the White House in 1878?
17. At 5 feet 4, who was the shortest president?
18. Which president's pet parrot had to be ejected from his funeral for screaming obscenities at mourners?
19. Which president had the most children?
20. Eleanor Roosevelt made news in 1939 when she served what dish to visiting King George VI and Queen Elizabeth?
21. Which president, when short of funds, offered White House china as the ante in poker games?
22. Which president's election was marred by charges of electoral vote corruption in Florida and other states after he lost the popular vote to his opponent?
23. Which well-dressed president was rumored to own 80 pairs of pants?
24. Who was the first chief executive to appear on television?
25. Which two presidents were signers of the Declaration of Independence?
Answers
1. Thomas Jefferson and John Adams (1826) and James Monroe (1831)
2. Zachary Taylor. He became ill with cholera that night and died five days later.
3. 1776
4. Vicksburg, Miss. It came a day after the Union victory at Gettysburg, marking a turning point in the Civil War
5. Ann Landers and Abigail Van Buren (real names: Esther "Eppie" Lederer and Pauline Phillips)
6. 19 innings. The game ended at 3:55 a.m., and the Braves then fired off their Independence Day fireworks, leading many local residents to believe the city was under attack.
7. June 14, 1777. This date is observed as Flag Day.
8. Seven.
9. The bombardment of Fort McHenry
10. Philadelphia, 1960
11. So no one state would be above another.
12. True. The phrase was added in 1954.
13. William Henry Harrison, who died of pneumonia shortly after his inauguration. He served only 32 days, from March 4 to April 4, 1841.
14. Thomas Jefferson
15. William Howard Taft, on April 14, 1910, at Griffith Stadium in Washington, D.C.
16. Alexander Graham Bell (called by President Rutherford Hayes)
17. James Madison
18. Andrew Jackson
19. John Tyler (15)
20. Hot dogs
21. Warren G. Harding
22. Rutherford Hayes, in 1876
23. Chester Arthur (also the first to employ a full-time valet)
24. Franklin Roosevelt (April 30, 1939)
25. Thomas Jefferson and John Adams
Posted by LindaSue at 9:12 PM

So, Eleanor Roosevelt served hot dogs to the King and Queen ? We had visitors from England and in our big gathering we served hot dogs with all the trimmings and toppings and guess what? They LOVED the hot dogs, hot diggety dog...put some on the barbecue to go along with the deep fried turkey and the hamburgers.

Sounds like you will have a nice day today on Buhl-a-land!

Thank you for your superior post. It is encouraging to know that there are many other Americans out there who are truly proud and thankful for our country's heritage. I got quite an education in your Q&A segment!
Happy Independence Day!
Debbie

Despite history being one of my favorite subjects, I fell woefully short of an "A" on this quiz! Fun stuff!

Lindasue, I just loved this post. Much to my surprise I knew a good bit of these! You made me laugh with your comment on my blog about the preacher and the June bug! So funny! blessings,Kathleen

Lindasue, I just loved this post. Much to my surprise I knew a good bit of these! You made me laugh with your comment on my blog about the preacher and the June bug! So funny! blessings,Kathleen

What a sweet stumble that landed me in Buhl-a-land! The Chamber's quote in your profile would be enough for me to chew on all day. I took the liberty of adding it in the sidebar of my Power, love and self-control blog. I only had time for one "page" of your postings. Hope to return to finish after "chores" are done!

Great post! Loved all the neat facts. I hope your 4th of July was happy and fun!