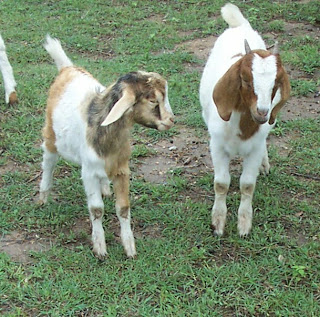 January 19 to August 19 - I'll miss you Mikey -
One of triplets - there was Mikey on the ground watching his brother getting cleaned up by his mom, Stumpy. Stumpy was good for multiple births but could only nurse one kid - so we bottle raised him. He had the loudest voice, always bleating the second he heard one of us coming from the house down to the pens. He and Rocky adopted one another as our two surviving bottle boys. (Rocky was a twin and rejected by his mother also). They were inseparable - until this morning. Poor Rocky seems to miss him today. We have buried Mikey and walked the property to try to find out where the predator is coming through. Probably going to put up a hotwire (electric wire) on top of the pen fencing and gates. Predators are part of real life - it stinks but Mikey had a great life for all it's being far too short. Even with this - it is still good in Buhlaland -but I'm going to miss that incessant bleating voice. Bye Mikey - oh he was named Mikey after that old cereal commercial where the kids try to find somebody to taste the new cereal and they shove it to Mikey - 'cause Mikey will eat anything. Yep - that was my Mikey.
Posted by LindaSue at 10:47 AM

Oh, I'm sorry, Linda. I know your goats are special to you, especially Mikey because you bottle-fed him.