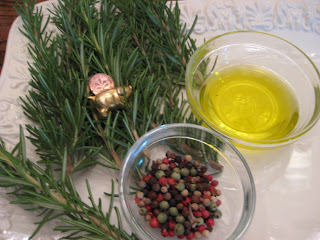 Good Monday to you! We had friends over Sunday afternoon to share a meal - decided to barbecue which might not have been a wise choice - heat index was a mere 104!. DH persevered and cooked all the kebabs everyone assembled.
Wanted to give extra flavor to the pork but not traditional red sauce and DH dislikes the vinegary barbecue baste. We have a small forest of rosemary in the garden and always have extra virgin olive oil (or EVOO). Pantry yielded a big container of peppercorn medley (from the center of gourmet cooking - Wally World!).
We were kebabing the meats so I cut a nice pork roast into large cubes (the little brass pig with a lucky pence in his back represents about 3 pounds of pork - cooked pork photographs ugly and we cooked all I marinated).

Took the cubes of pork, about 1/3-1/2 cup of EVOO, at least one tablespoon of very coarsely ground pepper (could have just been broken up in a mortar and pestle but I don't have one). Added 5 or 6 good sized pieces(would translate into 4 to 6 inch long sprigs) of rosemary in the container and sealed it up. Marinated for at least 4 hours (in the fridge - seems goofy to add the refrigeration part but don't want anybody getting poisoned by my recipes!). Next time I think we'll try overnight marinating. Everyone really liked the pork - in fact they ate more pork than the chinese marinated chicken or pure and delicious rib eye steaks. Just a thought since it is BBQ season and sometimes you want something different. Same concept would work great with a pork tenderloin or chops.

We had such a lovely day on Buhlaland and as if having pleasant company and good food weren't enough --we had a beautiful visitor after the human guests were gone. The doe is still limping a lot and we haven't seen the fawn again but are grateful to have the beauty of creation - up close and personal! It is good on Buhlaland --good friends, good food and goodness it was HOT. 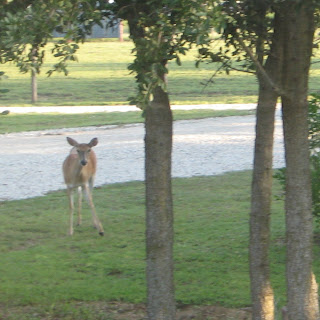 I didn't know what Evoo was so did a google search....olive oil! make sense and I will remember this next time we are barbecuing.....its cool here, in the 60s and overcast...has been for the last 10 days or so....we have done some grilling, mainly yellow squash and other veggies...yummy!

That pork sounds delish! I have rosemary growing on the deck - might have to try that! It's so hot here & humid. We don't have your temps, but we have the humidity to deal with. Feels like we're in a sauna... it's really bad when you having hot flashes along with it! haha!

Dani - it doesn't take a lot of olive oil - just something to bind the flavors together. I gathered in our first squash yesterday,
Vickie - I know what you mean about the heat - I think I could sleep soundly with the ceiling fan on high and our bedroom AC cranked down to 70! (we have a separate bedroom unit so we don't cool the whole two stories when we are just in one room!)

I am thinking this sounds like a delicious meal I need to make this week, I have everything you listed!

Sounds like sharing your meal and time with friends was more filling AND fulfilling then just the food alone.

Yay for unpretentious Wally World!
Yay for your simple yet delicious recipe for pork marinade!
Yay for good friends to sup with!
Yay for wild visitors!

You have a good day now, Mizis Linda Sue.

Lanny Girl - I love it when you visit - thanks for the cheers!

hehehe the first picture reminded me of Christmas time :)

I'm yipping it up here with Lanny!!!! I agree --- good food, good marinade, good hubbie to cook it, good friends -- what more could anyone want?????

Loved the picture of the deer!!! Hope her leg gets better. And in your past post ---- you have the same crocs as mine. ARen't they just the best thing ever created????

It's always fun to have a cookout and friends over! Just love deer when they come close! It has been up to 106 here....could almost have a cookout with out the grill! Have a good week. blessings,Kathleen

Sounds like good food and good company, Linda Sue- no better way to spend an evening!