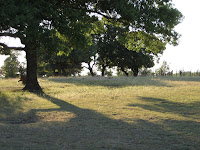 DH is one of the genuine guys about whom people say "real men love Jesus". A habit he developed a couple of years ago was to include a scripture or illuminating statement in his email signatures. In the past couple of weeks he has used a longer verse which captivates me. God speaking to Elijah ---1 Kings 19:11 The LORD said, "Go out and stand on the mountain in the presence of the LORD, for the LORD is about to pass by." Then a great and powerful wind tore the mountains apart and shattered the rocks before the LORD, but the LORD was not in the wind. After the wind there was an earthquake, but the LORD was not in the earthquake. 12 After the earthquake came a fire, but the LORD was not in the fire. And after the fire came a gentle whisper. 13 When Elijah heard it, he pulled his cloak over his face and went out and stood at the mouth of the cave. Then a voice said to him, "What are you doing here, Elijah?"

Have you been hearing a whisper lately - what ARE we doing here? I'm working on some things - I promise Lord - I'll get around to what you want me to do when I'm better organized, thinner, healthier, better educated, more prepared, richer, smell better, happier, - well He's heard it all before from better followers than me. Amazing how He is still there - after all the drama and chaos and storms - whispering to me - "what are you doing here, Linda Sue?" One of the amazing things about grace - He gives it without us ever being worthy - not even a tiny bit.


Without going into a bunch of drama (I'm WAY over the top with people and their dramas) I have to tell you - the Lord's whispers are definitely more effective than all the storms and winds and quakes and fires. Listen to the whispers - read His word.

I'll be back in the next few days - life is gentling.

I've been experiencing the same thing, Linda Sue..... God has really been whispering to me lately about some things I need to work on in my life, and being buy about his business. I always love the way you share your heart!
Can't wait to hear more about what's been going on with you!

I've never comented on your blog before, but it's time I did. I'm Kid's Kitchen's MIL and that's where I found you. I love your word pictures of the farm and life there. I just adored your pictures of your MIL and know you will miss her. What a huge blessing that you'll see her again. I lost my Dad last year and that is the best comfort there is!!
I also appreciate your words of encouragement to my daughter (Sharan) while she has been battling leukemia. She is all finished with her treatments now and is doing very well. She gave her testimony and sang a song at church Sunday night - what a blessing that was.
By the way - I was born in Killeen, TX - Dad was in the army at the end of WW11 (1948).
Pat Spach

I so loved your post today. As changes take place in my life, I'm finding, too, that He doesn't often speak through the wind, fire, storms, and earthquakes! It is the still small voice when my heart quiets down that I, too, hear the "What are you doing here?" The question demands an answer, doesn't it????? Kind of like Dr. Phil's, "How's that working for you????"

Thanks again for that gentle reminder to listen! I'm a great one for speaking when I should be quiet and listen instead!!!!!