Don't panic, of course we spent time praying in gratitude for the OVER abundance of our blessings - we had a great walk early,just as the sun was coming up. DH and I are delighted with the beauty of where we are living. 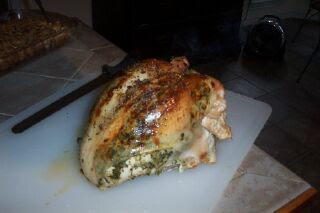 I hate to shock people, but for those in the south or raised by southerners - Thanksgiving is about the food, well the food and the football. Unfortunately for my "adoring public" - not much of the food turned out great. I tried several "low fat, no cholesterol, super healthy" recipes due to our current need for cholesterol lowering, fat reducing getting fittedness (not bothering to use spell checker today!). Mashed potatoes were excellent, cranberry sauce was good, gravy was OK, green beans were simply a vegetable. BEST part was the turkey breast. For 3 of us - a whole bird would have been too much. Earlier in the week, a tv chef did a herb and olive oil mixture under the turkey breast skin before cooking it and I decided to try her method. WOW - very moist, lots of flavor and the best we've done. I semi brined the breast ( for the last 2 hours of thawing it was in a huge bowl of lukewarm water salty water and seasonings). After drying off the turkey, loosened the skin to make a pocket in which to put the herbal essences (that sounds like I used hair products doesn't it?) In a Cuisinart,finely chopped onion,olive oil, fresh rosemary, fresh sage, flat leafed parsley, sea salt and a mixture of freshly ground peppercorns (white, pink , green and black - available at WalMart ). Put prepared turkey in a small roaster - in oven around 350 degrees for an hour, put the roaster cover over it for another hour. After the second hour timer went off - I began testing with digital thermometer until it reached about 175 internally. Just delish and will do this again for sure - you could use any kind of seasonings and make it totally different.
My Mom was a great cook - she made everything from scratch and our holidays were amazing meals, we'd wake up to the smell of sage, onions and celery on Thanksgiving. She usually baked the dressing separate from the turkey. Drier dressing makes a great receptor for gravy!
Dressing in my household is artery clogging level of fattening because it is made with a couple of sticks of butter,6 or 8 whole large eggs and lots of rich cornbread. To go low fat , used healthier recipe for cornbread and whole wheat bagels - added usual sauteed in broth chopped celery, onions, parlsey, pimento and mushrooms, generous measure of poultry seasoning - then eggbeaters instead of real eggs with low fat chicken broth to moisten. Turned out to have a lot of texture (euphemism for a little grainy) and plenty of taste. 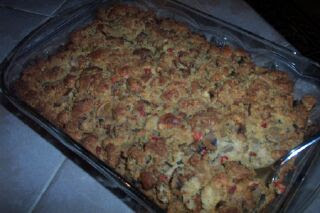 Thanks Mom for teaching me to try new things (even some that definitely went in the trash )- if you don't try you don't find great new foods or for that matter new people, adventures or ways to remove facial hair.
The smells and work of a holiday definitely create nostalgia for being at home with my parents and brother - watching the Macy's parade on TV, nibbling on whatever goodies were already on the dessert table and being together as a family with inside jokes and eye rolling lame stories- all the stuff you don't know you'll ache for and miss until much later in life.
Here in Buhlaland, we ate well, too much and talked a lot about memories. It is good.
Posted by LindaSue at 9:09 AM

That turkey looks great! Our turkey was rather dry--I overcooked it for fear of it being underdone.